Pangolin Information From Around the World

This page is designed to be a resource center for all things pangolin.  Ever since we visited Vietnam and saw our first live pangolin, we have been working hard to learn more about the species and to create more awareness opportunities so others could also get involved.  We hope you not only like this page, but that you will share it with everyone you know.  Additionally, if you come across any cool pangolin websites, please let us know and we will consider adding them to this page as well:

Pangolins are unique in that they are the world’s only scaly mammals. Their scales are made of keratin, which is the same protein found in rhino horn and human fingernails.  These super-strong scales overlap like artichoke leaves, and when attacked pangolins roll up in a ball to protect themselves. However, this doesn’t help them defend against poachers, who can just pick them up, put them in a sack and carry them off.  Pangolins have long, powerful claws that are perfect for ripping open ant nests and super long sticky tongues to pick up ants and termites. Their tongues are attached near to their pelvis and are sheathed in a chest cavity.  There are eight species in total, four of which occur in Asia and four in Africa. All eight species of pangolin are listed as threatened with extinction on the IUCN Red List. 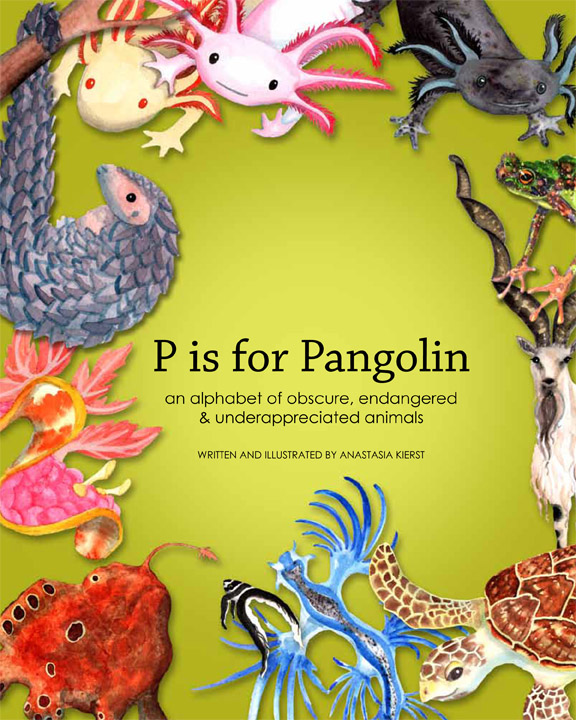 P is for Pangolin by Anastasia Kierst, an alphabet of obscure, endangered & under-appreciated animals:
What is a pangolin? Better yet, what is a yeti crab and how does it grow food? Learn fun and fascinating facts about these and many other little-known creatures from across the globe. Each animal is richly depicted in bright, playful watercolor illustrations. The back of this ABC book features four teacher resource pages with thought-provoking activities written by the author, a certified teacher. In addition, there is a section dedicated to conservation for readers who want to take action. Even avid wildlife enthusiasts are sure to learn something new from this extraordinary alphabet book.

Get your signed copy here:

Did you know that Pangolins are considered the most poached and trafficked mammals on the planet?  Sadly most people we talk to don’t even know what a pangolin is.

Did you know that the scales on a pangolin make up about 20% of it’s body weight?

Here are even more cool facts from the folks at SavePangolins.org:

Pangolins, often called “scaly anteaters,” are covered in tough, overlapping scales. These burrowing mammals eat ants and termites using an extraordinarily long, sticky tongue, and are able to quickly roll themselves up into a tight ball when threatened. Eight different pangolin species can be found across Asia and sub-Saharan Africa. Poaching for illegal wildlife trade and habitat loss have made these incredible creatures one of the most endangered groups of mammals in the world.

Did you know that there are eight pangolin species?

When born, pangolins are about six inches long and weigh about 12 ounces (.75 lbs). Their scales are soft and pale, and begin to harden by the second day. Pangolin mothers nurture their young in nesting burrows. A mother will protectively roll around her baby when sleeping or if threatened. Babies nurse for three to four months, but can eat termites and ants at one month. At that time the infant begins to accompany the mother outside of the burrow, riding on the base of her tail as she forages for insects.

Why are pangolins under threat?

Pangolins are declining throughout their range due to increasing demand for their meat, which is eaten as a luxury dish in some places, and their scales and other body parts, which are used in many traditional medicines.  This is driving unsustainable levels of poaching and illegal trade. As a result, pangolins are now widely regarded to be the world’s most trafficked wild mammals with more than one million estimated to have been snatched from the wild in the past decade. This is despite a commercial trade ban for wild-caught pangolins in Asia that has been in place since 2000.   As the populations of the four Asian pangolin species plummet, traders are now looking to Africa to meet demand.

Here are a few short videos about pangolins so you can get to know them:

Organizations we like that are working hard to save pangolins:

How you can make a difference for pangolins:

Want to do your part to save pangolins?

Spread the word. Tell your friends and family about pangolins. In recent years, more people around the world have learned about pangolins and the threats to them. This has directly led to more support for policy reform, scientific research, and more conservation efforts. You can help by spreading the word about pangolins and how they’re in trouble.

Report wildlife crime. If you see pangolins and other illegal wildlife in restaurants or other business establishments, contact your local authorities or one of the numbers below:

Report wildlife crime. If you see pangolins and other illegal wildlife in restaurants or other business establishments, contact your local authorities or one of the numbers below: