Carter and Olivia were invited to speak during the Georgia Public Service Commission IRP Hearing.  Our friends from the Sierra Club and from Greening Forward asked Olivia and Carter to speak and to share their concerns with regards to the fact that GA Power is still focusing on burning more coal as opposed to switching to alternative power solutions like wind and solar.

As a monopoly, Georgia Power is regulated by the Georgia Public Service Commission (PSC)- made up of five elected officials. Every three years, Georgia Power is required to file an ‘Integrated Resource Plan’ (IRP) for approval by the PSC. The IRP lays out the company’s 20- year energy plan to generate electricity for the State of Georgia, including proposals to build new or retire old energy facilities. The PSC has the authority to reject, amend, or approve this plan as they see best for the customers and shareholders of Georgia Power.

What is in the 2013 Integrated Resource Plan: 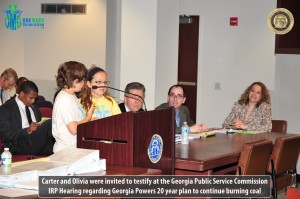 As part of their 2013 IRP, Georgia Power is requesting approval to begin burning Wyoming-based coal at their 35 year-old Plant McIntosh Coal-Fired power plant in Savannah Georgia. Plant McIntosh did not operate in 2012 because the company found it was too expensive. Switching the plant to Wyoming coal could mean the plant burns more often, putting more toxic coal-pollution into the air and water of coastal Georgia for the next 30 years!

To win approval, Georgia Power must make a strong economic case explaining why continued operation of Plant McIntosh is the best decision for customers, rather than retiring the facility. To make that case Georgia Power used several outlandish assumptions, which are biased toward burning-coal:

Georgia Power should retire the outdated and dirty Plant McIntosh. The plant did not run in 2012 and is not needed today. Shipping coal all the way from Wyoming and install numerous pollution controls would be costly to ratepayers and would increase the risk of health problems like cancer, stroke, heart disease, and upper respiratory disease to coastal Georgia residents for years to come.

We hope you will also support our efforts and send GA Power a message asking them to consider our future generations in their decision and start investing in clean, renewable power alternatives such as Wind and Solar.  Together we can make a difference.

Last Thursday, as a part of Georgia Power’s 20-year energy plan, the Georgia PSC voted to not only approve Georgia Power’s plans to retire 20% of its oldest and dirtiest coal plants; the Commission also issued an additional order directing the Southern Company subsidiary to add 525 MW of solar to its fuel mix by 2016! This addition means that Georgia will have 1 GW of clean wind and solar energy online by or before 2017!  You can read more here: