Olivia picked this prickly looking fish for her trivia tonight.  Check out the cool facts she found.  These are one of the most common freshwater fish, widespread in rivers, canals and still waters.  They are an active predator that both ambushes small fish from cover and chases them in open water.  Their bold black bars against its olive-green flanks are perfectly suited for hiding in reeds and weeds.

These fish are carnivorous fish and like to feed on smaller fish, shellfish, or insect larvae, but can be caught with nearly any bait. They commonly spawn during the spring, when the females lay strings of eggs in covered areas such as near branches or underwater plants.  These guys grow to around 5-pounds or more, but the most common fish to be caught are around 1-pound or less, and anything over 2-pounds is considered a prize catch. The British record for one of these is 6-pounds, beating the previous one by 1 oz.

So here are Olivia’s questions:  Tell us what kind of fish this is and what color they tend to be attracted to when searching for prey?  Also, some of these fish have a tinged red-yellow coloring.  Tell us what causes these fish to have these colors? 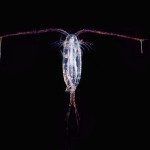 Congratulations to Joey Parks from Upper Haven England for being the first to get the trivia correct.  The fish we featured is the Perch.  Perch is a common name for fish of the genus Perca, freshwater gamefish belonging to the family Percidae. The perch, of which there are three species in different geographical areas, lend their name to a large order of vertebrates: the Perciformes, from the Greek perke meaning spotted, and the Latin forma meaning shape.

Perch on the prowl for their next meal are partial to the color red which is why they go after such fish as the roach because of their red fins.  Perch that are tinged red-yellow may be this color from eating large amounts of cyclops, a type of plankton with high levels of the same chemicals that give carrots their color.  Here is more on these aggressive fish: Perch

Thanks for playing along 😉