SHOCKING: The Story of the Bluefin

While trying to do our part to raise awareness about the Plastic Pollution problems and its affect on our oceans and the many animals it kills, we are still a company that is all about wanting to save endangered species.  Here is an amazing video from the folks at ‘How To Save The Bluefin‘ that helps spell out the seriousness of the issue of ‘Overfishing’, and in particular with regards to the Bluefin Tuna:

At the end of the video they state that Bluefin Tuna could become extinct in less than one year.  If that is correct, we need to act now.  We dug a bit deeper and found several reports supporting the claims in this video.  One such document is very detailed and covers all aspects of the overfishing issue with regard to this species.  You can access the document here: Bluefin Bonanza 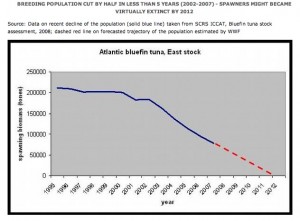 Here is another article that helps explain the dire need for us to get involved.  The report was published by Wildlife-Extra.com: Mediterranean bluefin to be functionally extinct by 2012

WWF is calling for the immediate closure of the Mediterranean bluefin tuna fishery to give the species a chance to recover, while continuing to encourage consumers, retailers, restaurants and chefs to join the global movement to avoid the consumption of the imperiled fish.

There is also growing support to suspend international trade of Atlantic bluefin tuna by getting it listed on Appendix I of the Convention on International Trade in Endangered Species of Wild Fauna and Flora (CITES) when contracting parties meet in early 2010.

We also found this report published by our friends at TreeHugger.com:

In an effort to do something about this sorry state of affairs, during the biannual meeting of the International Commission for the Conservation of Atlantic Tunas, held in Marrakech, Morocco, conservation groups Oceana, Greenpeace and the Blue Ocean Institute are urging the United States to pursue a complete moratorium on bluefin tuna fishing in the entire Atlantic basin.  And the Oceana organization posted these comments on the issue of an unbalanced ecosystem:

“Oceana’s report finds that depletion of prey fish may be starving the oceans. You might think of predators eating 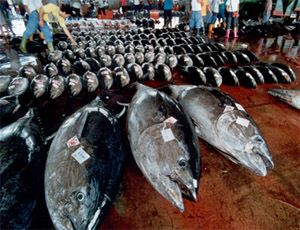 anything and everything that comes in their path. While this may be true for some species, there are also a large number of predators that specialize on one or two food types that make up the majority of their diets. When overfishing, aquaculture and climate change exhaust these preferred foods, ocean predators and their young suffer and may not survive.”

You can read their full report here: Hungry Oceans: What Happens When The Prey Is Gone?

Bluefin tuna are on the brink of extinction due to overfishing. The oil spill in the Gulf of Mexico, the spawning ground for all Western Atlantic bluefin tuna, now further jeopardizes their recovery. Ask the government to protect and restore populations of bluefin tuna in the Gulf.

Finally, check out what these enterprising young men did to help spread the word.  Who said one person couldn’t make a difference:

The abundance of Atlantic Bluefin Tuna is at a critically low level and a fishing moratorium is needed to prevent population collapse (Safina and Klinger 2008).

What can you do?

general.  Here is a link to their office with contact information: The National Marine Fisheries Service

It’s become abundantly clear in recent years that the agencies that are supposed to regulate fishing are caught in the nets of the fishing industry. Saving the bluefin, then, requires putting unsustainable seafood purveyors on the hook. Sign our petition asking Nobu restaurants to immediately remove bluefin tuna from their menus, and take the Center for Biological Diversity’s pledge to stop eating bluefin tuna and boycott dining establishments that serve the fish. It’s the only way to ensure that there really will be plenty of bluefin in the sea.

And finally, consult our Guide to Ocean Friendly Seafood or FishPhone for more information about Atlantic Bluefin, and consider alternatives to bluefin when dining or shopping.

Here are two great petitions which you can sign to help our friends from The Center of Biological Diversity and from Oceana:

Bluefin Tuna are in Trouble

As always, all of us at OMG wish to thank you for caring and for showing your support.  Together, we can make a difference.