Olivia is up with todays trivia and she picked this bat in celebration of the fact that she and her brother will be helping out during the 2011 Bat Blitz tonight in North Carolina.  The event is sponsored by the folks at The Southeastern Bat Diversity Network.  The SBDN, like other groups devoted to conservation of bats and their habitats, is especially concerned about White Nose Syndrome (WNS), a disease that is killing thousands of bats each winter.  SBDN 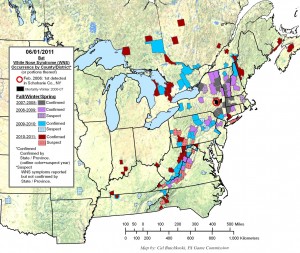 hasalways taken a well-considered approach to these large-scale inventories (“bat blitzes”), and WNS requires that they plan and conduct the inventory work in a manner that doesn’t contribute to the spread of this rapidly advancing disease.  Olivia and Carter will not be handling any bats, but they will be allowed to tag along and help record vital data from the bats that are studied during the event.  We are so excited.  Anyway, on to our trivia.

These guys maneuver and hunt with great precision using echolocation, the animal equivalent of sonar.  They devour any insect that crosses it flight path, eating thousands each night.  These bats live in three different roosting sites: day roosts, night roost and hibernation roosts. Day and night roosts are used by active in spring, summer and fall while hibernacula are used in winter. Day roost sites are typically found in buildings, trees, under rock in wood piles and sometimes in caves. Nursery roosts are 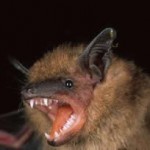 found in hollow trees and other natural crevices as well as around buildings. Nursery roosts have also been found under sheet metal roofs of trapper’s caches and attics of buildings. Night roosts tend to be in the same buildings as day roosts, however these roosts tend to be confined spaces with many bats packing themselves together to increase roost temperature. Bats congregate in night roosts after feeding in the evening. Thus night roosting could result in the accumulation of feces away from the day roosts which could make the latter less conspicuous to predators. These bats usually hibernate in caves and sometimes abandoned mines. Northern populations of bats enter hibernation in early September and end in mid-May while southern populations enter in November and ends in mid-March.

So here are Olivia’s questions:  Tell us what kind of bat this is and tell us how much more acute their hearing is compared to humans (humans can only perceive sounds from 20-20,000 Hz)?  Also, tell us what their name is in Greek and what it means?

As a bonus, tell us how you can tell if a bat has WNS in the summertime?  In winter while they rest and hibernate, the WNS fungus starts to build up as a white powdery looking growth on their noses and chest area.  During the warmer months, they are more active and also readily groom themselves so these same tell-tale signs are not as visible.

Congratulations goes out to 8-year old Emily Harrison from Wilmington MS for being the first with the correct answer.  We are also glad to hear that you have already been on 2-Bat Blitz events.  This was Carter and Olivia’s first and they had a great time.  The bat we featured is the Little Brown Bat.  The little brown bat (sometimes called little brown myotis) (Myotis lucifugus) is a species of the genus Myotis (mouse-eared bats), one of the most common bats of North America. The little brown bat has been a model organism for studying bats.

Bats have the most acute hearing of any terrestrial animals and can sense sound from 100 hertz (Hz) to 200,000 Hz.  The bat wing extends from the hand, hence the Greek name ‘Chiroptera’ meaning ‘hand wing’.

And as for the bonus question, the white fungus associated with WNS is only one of the signs of WNS, and we you should not expect to find bats with fungus on them during the summer (because they are active and grooming). However, other abnormal characteristics may be indicative of WNS. Abnormal characteristics observed in summer may include: extremely underweight bats; flaky, dehydrated or wrinkled wing/tail membranes; wing lesions; discolored spots /scarring of flight and tail membranes; multiple small to medium sized holes in wing membranes; torn or necrotic areas at the trailing edge of wing and tail membranes.  Here is more on these tiny bats: