Recently Carter and Olivia were invited back to the Fayette Public Library to conduct another one of their Educational Outreach programs.  This time the two founders of our organization cooked up a fun program about Endangered Species for all the kids.

Their goal was to raise awareness about the many endangered species and to share with the kids some of the many causes threatening so many animals.  They also discussed ideas on how we all can help.

I personally enjoy watching Carter and Olivia conduct these programs with their peers because you can truly see how excited the kids get when they learn about all the things OMG has been doing and they too see that ‘Anybody Can Make A Difference’.

We talked about how global warming was harming the Polar Bears.  We discussed the need to preserve the habitat for the Burrowing Owl is Canada, we let the kids see how alarmingly low the numbers of Tigers are left in the wild and

discussed what is causing their disappearance.

wiping these guys out.  We naturally discussed the plight of the Panda Bears and the poor Mountain Gorillas.

Soup.  We also taught the kids how to tell the difference between an African Elephant and and Asian Elephant, while covering the issues each of those species is facing as well.

We even covered some of the issues facing our Bobcats and helped them understand how a species could be listed as endangered in some states, but not in others and what causes these different levels of protection.

And finally, we covered the dire situation with regards to our Amphibians

We let the kids know that Earth is facing its largest mass extinction since the disappearance of the dinosaurs, with up to half of the world’s 6,000 amphibian species in danger of extinction. 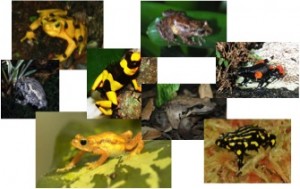 Frogs, in particular, have suffered, having lost an estimated 170 species in the last 10 years alone, with another 1,900 in a threatened state, which is one step below the endangered designation (meaning extinction is imminent). But only part of the destruction is man-made.

Amphibians (frogs and toads, newts, caecilians and salamanders) are being affected by habitat loss, climate change, pollution, pesticides and introduced species, but face an even bigger threat from a deadly parasitic fungus known as amphibian chytrid.

The chytrid fungus coats the frog’s skin and makes its pores non-functional. Because a frog relies on its porous skin for

hydration and for some of its respiration, the fungus essentially cuts off its water supply and makes it difficult to breathe. In the end, the frog dies from dehydration.

We finished our presentation as we always do, by telling the kids that each and everyone of them have the same opportunity to help make a difference and that they should never assume that because of their age, that their voices

and compassion doesn’t count.  Carter and Olivia are living proof that each one of us has the power to be the change for all animals, and for our environment.  All the kids love their presentations and we sincerely enjoy being invited to host such events.

If you are interested in having our founders come and speak to your school, organization, or other function, just drop us a line, we will gladly help work out the details and create an event that is sure to motivate and excite your audience.

After their hard work, we treated them both to some well deserved ice cream 😉

“One More Generation” brought two wonderful programs to the Fayette County Public Library. They came as part of our weekly program for elementary-age students. One program was a plastic bag awareness program that helped our kids really focus on how simple decisions about using plastic can make a big difference for our planet and its creatures. The other program focused on endangered animals and ways kids can get involved in protecting all creatures of the earth. OMG’s presentations were lively, interactive and very informative. After the programs, it was so wonderful to see the students run up to their parents to tell them all the things they needed to start doing right away to cut down on plastic use and save the animals! I have already recommended OMG to colleagues and others interested in helping increase our children’s awareness of these important issues. Thank you OMG! Ada Demlow, Fayette County Public Library Children’s Librarian.