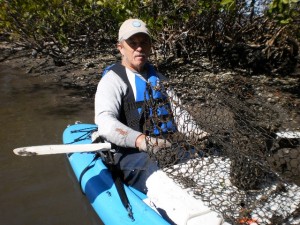 Jim is currently the Volunteer Dive Coordinator at the Florida Aquarium, and has been for the past 6 years after volunteering with the Aquarium since it’s opening in 1995. He’s on the Board of Trustees of keep Tampa Bay Beautiful, a member of the Citizens Advisory Committee for Tampa Bay Estuary Program, and also a board member of the Egmont Key Alliance as well as a member of several other local and national environmental organizations. He enjoys giving his time and energy to just about any group that’s doing something to protect out home… Mother Earth. He received the Vol of the Year award at the Florida Aquarium in 2001 as well as similar award from Tampa bay Watch in 2009, and has been nominated for other similar awards from various organizations. He enjoys donating his time to any environmental group or one that is doing good for others. He likes to tell people that ask… “It’s a great way to spend my time…” doing good things with good people….not a bad way to spend the day”