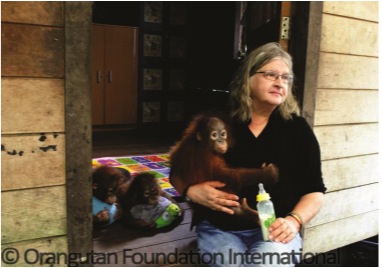 Dr. Biruté Mary Galdikas has been studying wild orangutans for over 43 years at her Camp Leakey study area in Tanjung Puting National Park, Kalimantan Tengah, and Indonesia. With the exception of Jane Goodall’s work, Dr. Galdikas’ research is the longest continuous study of any single wild mammal population undertaken by a principal investigator.

Dr. Galdikas is the co-founder and President of Orangutan Foundation International (OFI), a non-profit with sister organizations in Canada, Europe, Indonesia, and Australia. Dr. Galdikas and OFI are fighting the threat of orangutan extinction, which is mainly due to the destruction of tropical rainforests, the orangutan’s only habitat.

OFI runs numerous conservation and orangutan welfare programs in Kalimantan, including purchasing and protecting tracts of forest land, patrolling national parks and other conservation areas, promoting sustainable eco-tourism, and providing education initiatives to local people and training plantation workers to implement a “zero-tolerance” policy on killing, harming, and capturing endangered species. OFI also runs a Care Center and Quarantine (OCCQ) that takes in orphaned orangutans and rehabilitates them for release back into the wild, providing them with medical care, support, and nurture. Currently, the OCCQ houses over 330 orphan orangutans.

Dr. Galdikas has won numerous awards and prizes for her scientific and conservation work including the prestigious Tyler Prize (sometimes said to be a precursor to the Nobel), Officer of the Order of Canada, and Chico Mendes Award from the Sierra Club, as well as the Indonesian Kalpataru Award. Dr. Galdikas leads OFI’s work and spends up to half the year in Kalimantan at the OCCQ and Camp Leakey.